skip to main | skip to sidebar

The Long Hard Days of Summer....for the Horses 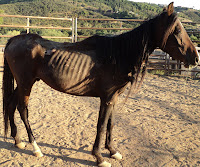 This summer, FalconRidge Equine Rescue saw incredibly high numbers of horses in need and horse owners in need. More horses are now being abandoned, more owners are losing their homes to foreclosure, loss of income and jobs, and more horses in need of new homes due to owners not being able to afford to feed them from rising gas and hay costs! It IS a crisis and we are trying to help as many horses as possible so that they do not suffer.

At the end of May, two horses were left on a property in San Bernardino, a neglected buckskin mare and paint pony. They were picked up by San Bernardino Animal Control and held for two weeks, then put up for adoption. Nobody wanted them and they were slated for euthanasia. They arrived to FalconRidge thin, wormy and in poor condition. The buckskin mare is blind in her right eye and only 6 yrs old. She was named Buttermilk because I felt she looked like Dale Evans horse. The little 4 yr old black and white paint pony with the appy legs was named Bullseye. Both horses needed to have their teeth floated, to be wormed, have their feet trimmed and to gain a few hundred pounds. They are now filling out and handleable.

Diamond was a grey mare rescued by Riverside Department of Animal Services from a neglectful owner. She was brought in and put up for adoption and nobody wanted her, so she was at risk for euthanasia. She was only 6 yrs old. We agreed to take her and she arrived at FalconRidge. Diamond recently was kicked in the pasture and needed surgery after it was found a small bone fragment had broken off. She went to San Luis Rey Equine Hospital where Dr. Cannon removed the chip and she is now in rehabilitation. Diamond is a nice riding horse and hopefully will make a full recovery. Help with Diamonds vet bills are needed.

Mingo was a little bay mustang whose owner wanted to give him up to the rescue for sporadic bucking issues. Mingo now needs a sponsor to help support him with his feed and care here.

One owner called from the hospital where her green four year old quarterhorse had put her and she wanted him to come here as soon as possible. He arrived last week.

Dane, Lucina and Exceller were three horses whose Fallbrook owner we were trying to help out. They were given up by their owner after several months. All three horses are up for adoption and need loving homes. Dane is a nice quarter horse gelding. Lucina is a beautiful white arabian mare who is blind in her left eye. Exceller is a thoroughbred who used to be ridden by his owner and he is a looker. All horses were all in need of teeth floating, worming and farrier work, all which costs money and is needed to care for the horses.

At the end of June I was contacted to help Riverside Animal Services with a hoarder case of 12 arabians in Anza needing homes immediately. Mares were in with stallions and a picture of little Pee Wee, the worst horse of the herd with ribs showing and bites all over him stood out as the most in need and we agreed to take him. He arrived and appeared to be severely stunted, poor coat, mane in huge tangles, and bite wounds all over his body. Our vet said he had a broken rib from one of the kicks. Our hearts were broken upon seeing Pee Wee for the first time. Only 12 hands high, he was so pitiful, but walked up to me after his first good meal in his life, and said hi. He was incredibly, darling. Pee Wee needed to be fed slowly and we follow UC Davis guidelines for refeeding syndrome of emaciated horses which is alfalfa at several small portions a day for the first two weeks. Pee Wee has gained weight and he also was not halter broke when he arrived, so he had to be handled prior to having the farrier trim his hooves. He has slowly gotten better and has developed a following on Facebook, Pee Wee's Fan Club. He will have his teeth floated tomorrow by Dr. Jeff Moss and funds are needed to assist with Pee Wee's rehabilitation. He will be castrated next month after he has gained more weight. Right now he is loving attention, grooming and enjoying turnout with other horses as he has more energy now.

In August, we took in two horses from an owner who is losing their home to foreclosure, Skip and Magic. Both horses are in need of dental work, farrier work and some feed to fill them out. If you can help out with any donations for them it would be greatly appreciated. Our hay bills have doubled the last few months and the sad thing is due to that, the need for horses to be rehomed and increased twofold, making it more desperate for horses to find homes. By donating to us, you can help horses who would otherwise be homeless, neglected or euthanized. Every dollar, every penny helps. Another way to help is refer people to FalconRidge if they are looking for a horse to adopt or add to their family, or if they need a companion horse, we have several. Please spread the word so we can continue our work helping these wonderful horses. We find GREAT homes for these horses, giving them a new chance at life, as well as a permanent family home with contracts that protect them.

Please, please help. Donations are down and horses in need and costs are up!

Here is the link to donate online, where you can easily use a credit card or paypal:
http://www.nickibranch.com/falconridge/

Thank you for sharing, donating, volunteering or adopting to help us with our Champions, like super Pee Wee, the survivor!

With love,
Nicki and the herd at FalconRidge Equine Rescue 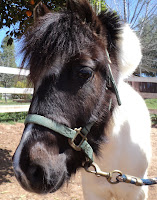 Greetings everyone! I hope you are all surviving the stormy weather lately and we have had much rain here the last two weeks. I have taken a couple of months off from the blog out of choice. Working full time to support the rescue because we take in so many horses gives me only so much time to devote to the blog and enjoy my family and horses as well. We have been incredibly busy here. I have been sharing information frequently on Facebook so please join me there, http://www.facebook.com/#!/profile.php?id=1017905423, to see up-to-the minute news of horses being rescued by us, taken in, rehabilitated and adopted out to loving homes.

In February we received a call from Animal Friends of the Valley shelter in Elsinore regarding a starved and neglected mare. The owners had been cited a year ago for not feeding her and after that she improved some, but then a year later officers went back and she was worse than when they saw her before! She had no food or water and the owners seemed not to care. I agreed to take her and they brought her down to us. She was skin and bones and a little arab mare and not that old. We named her Chicory,a perfect name for her and in honor of Delana Bennett, a radio personality. The little mare was stiff legged behind when she arrived and it was hard for her to even trot due to malnutrition. She gained weight quickly and is transforming into super Chicory! a darling girl now full of energy and evaluated under saddle and she rides well. She is just spectacular and I cannot fathom why someone would starve such a sweet mare.

Little Zeus and friends have been busy going to nursing homes the last two months, making seniors happy and sharing his horsey love with the world. He sure does enjoy his job of tiny FalconRidge Ambassador!

Brutus went to the Channel 6 news station to be on the morning news in their pet segment. He even went inside to meet the news anchors and walked up onto their stage to greet and surprise them during a break, which they loved! Brutus later got adopted by Maverick's adopter Cathey! Hooray for Brutus!

In March we were contacted about a pony with neglected feet. One hoof turned completely under and the other growing out to the right. The pony was brought to FalconRidge and found to be about 6 yrs old, hooves grossly misshapen, and he was a little black and white darling of a boy. David immediately trimmed his feet and greatly improved his right hoof to where he walked normal on it. The front left was trimmed so that it would slowly rotate forward and he will be trimmed weekly until it becomes hopefully normal again. We named him Newton and he is cute and as sweet as pie! Newton needs a sponsor. The sponsorship blog and info is in the link section on the right hand side of this blog and donations are greatly appreciated to help pay for his care. I have NO idea why someone did not get a farrier out for this pony! It took David only 30 minutes to trim him and greatly improve his hooves! Just crazy...

We were also contacted to take in an aggressive arabian gelding, Comanche, who will need retraining. Riverside Animal control wanted us to take in Rico, a two year old Morgan stallion who had been abandoned and had a growth on the end of his nose which needed surgical removal. He was castrated and had his unicorn horn removed by Dr. Jeff Moss. Funds are also needed to help with Rico and Comanches feed and care. Hay prices have jumped up significantly, making it necessary to ask for donations to help us continue to rescue horses in need.

This week we were contacted about a donkey in need. She was owned by an 80 yr old woman who was selling her property and the donkey had a growth on her ear. She could no longer afford the vet bill to treat the growth so we were asked to take her. She is 12 and named Molly and was owned by this woman for 8 yrs. Molly arrived on Wednesday and Dr. Jeff Moss arrived not too long after to take a look at her tumor. It was larger than we thought, and her ear hung down in front of her face like a santa cap and the tumor was bloody and hitting her in the eye, about the size of an apple. Dr. Moss performed the surgery and took just a half inch of the tip of Mollys ear off and removed the tumor within an hour. Her ear stood up afterwards and looks relatively normal now. Molly is incredibly sweet and loves to be snuggled by her face and scratched. She is looking for an adoptive family.

The Riverside County Horse Coalition will be coming soon in April! A meeting of all the rescues, humane agencies and veterinarians will be brought together to help at risk horses and network even more together to help all the abandoned and neglected horses of Riverside county...a good thing! The San Diego County Horse Coalition has been going well and you can see our website at http://www.sandiegohorse.org Helping people and horses is what we do.

There are more horses in need and on a list waiting to come in. Please consider donating today. Even a dollar can help a horse and is greatly appreciated! Thank you so much for caring!